× To Our Valued Patrons Due to State Regulation regarding COVID-19, da Filippos is offering Carry Out, Curbside Pick Up, Outdoor & Indoor Dining. Information can be found by clicking on the link below.

We Thank You for your Patronage & Support.
Best Wishes, Filippo Russo 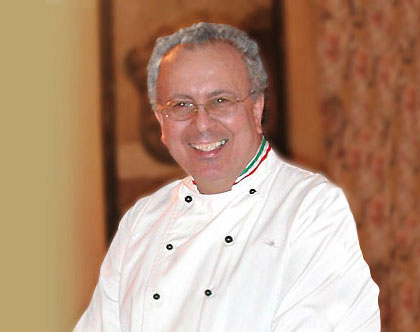 The acclaimed restaurant by Filippo Russo, simply is ... Un Capolavoro

The idea of master chef Filippo Russo is to bring the Italian culture of gastronomy to Somerville, New Jersey. Through his philosophy, Da Filippo's Ristorante is recognized by European patrons spanning as far east as Japan and Singapore. With his profound knowledge in the culinary field, Filippo Russo is able to present a level of authenticity through his dishes, replicating his mother's recipes as well as the environment Filippo was exposed to in Sicily.

Filippo Russo's culinary expertise began when he would observe his mother, Giovanna, cooking traditional Sicilian dishes in his hometown of Carini, Sicily. At the young age of fourteen, Filippo would go to work with his father, Rosario, as a fisherman in the Mediterranean shores. Having the opportunity to be exposed to a vast array of seafood, Filippo integrated his knowledge with his mother's culinary skills.

Filippo Russo's professional career began in 1982 when he immigrated to the United States. Throughout this time Filippo always held a higher standard; thus he continuously impressed his patrons by presenting assortments of specialty dishes. With the encouragement of his patrons, he was persuaded to open Da Filippo's Ristorante focusing on delicacies that clients would appreciate. In 1988 along with his wife Berti, he decided to venture out on this new journey and created Da Filippo Autentica Cucina Italiana. Since Filippo enjoys traveling to his native homeland, the emphasis of specialty items represents the different regions in Italy. Filippo Russo's culinary expertise ranges from, Piemonte, Veneto, Lazio, Umbria, Liguria, Lombardia, Toscana, Sardegna, and Marche.

Over the years Da Filippo's Ristorante received numerous acclimations from the New York Times, New Jersey Monthly Magazine and Zagat survey, The Star-Ledger, and The American Academy of Restaurant and Hospitality Sciences. The most honorable recognition presented to Filippo Russo is the Luigi Veronelli Award of Northern American fine Italian dining and Ignazio Miceli from Regaleali Winery Sicily. When guests arrive at Da Filippo Ristorante they are welcomed with European hospitality while finding themselves in a rustic ambiance.